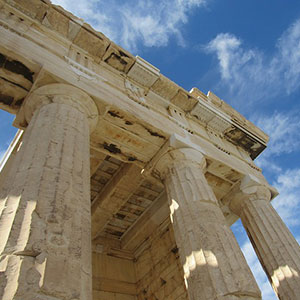 You’ve dreamed of the sparkling blue waters of the Aegean Sea and the white houses of the Greek Islands. Now you can have both with a guided tour of Greece with a Greek Island cruise. History comes alive on your guided visits to many of Greece's ancient sites. In addition to the Acropolis and Olympia, you'll also visit the ruins in Mycenae, dating from 1,350 to 1,200 BC and described in Homer’s epic poem, “The Iliad.” In ancient Greece, people traveled to Delphi to seek the wisdom of the Oracle. Learn about the Oracle, tour the excavations, and visit the Archaeological Museum. To add to your Greek experience, enjoy a cooking demonstration where you learn to make traditional tzatziki; take a sirtaki dance lesson; and try a glass of Ouzo. Plus, you'll be accompanied by an expert Tour Director who will bring this country to life by sharing its history, stories, and insider secrets. Your Mediterranean vacation continues with a 3-night Greek cruise on the Aegean Sea! Sail from Athens in an outside cabin aboard a Celestyal Cruise ship to dock on the legendary island of Mykonos. Wander amid its iconic windmills and white houses. Next, you’ll sail towards the shores of Turkey to visit Kusadasi and the ancient excavations of Ephesus. Then, cruise on to the island of Crete to explore Knossos, site of the 3,000 BC Minoan civilization. You’ll also sail, weather permitting, to the panoramic and volcanic island of Santorini—“The Black Pearl of the Aegean.” Relax while basking in the beauty of the sea as you return to Athens for guided sightseeing. From the picturesque fishing villages to ancient historic sights and sailing the Aegean Sea, this Greek cruise and tour vacation has it all!

ATHENS Welcome drink; guided sightseeing, visit the AcropolisCORINTH Cross the canalMYCENAE Guided visit of the excavations and museumOLYMPIA [LF] learn how to make the traditional Greek tzatziki appetizer; guided visit of the archaeological site and the museumDELPHI [LF] learn to dance the sirtaki and have a glass of Ouzo; guided visit of the excavations, visit the Archaeological MuseumCRUISING Three-night cruise with ports of call at Mykonos, Kusadasi (Turkey), Patmos, Santorini (weather permitting), HeraklionINCLUDED SHORE EXCURIONSKusadasi: ancient Ephesus, Heraklion: Minoan Palace of KnossosCRUISE DETAILS:

Prices are per person, based on double room occupancy.No single room supplement. No triple room reduction.Extra nights per person in Athens:January 1 to April 30 2019 in single room $78, in twin $58October 1 to December31 2019 in single room $119, in twin $68Cruise Details:The prices are per person in category XA twin outside cabin.Port Taxes $129 & Gratuities $30 to service personnel on board the ship are additional and mandatory. These fees will be added to your Vacation Estimate.Cabin assignments and meal seatings are determined during the tour prior to boarding.All Escapes by Globus tours and departures are excluded from the following Globus discounts: Book Early & Save, Welcome Back Credit, Second Tour discount and Small Group discount.